The jaws that bite, the claws that catch! 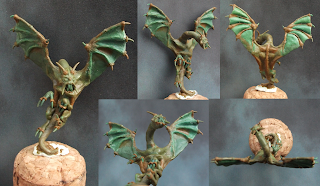 'Twas brillig, and the slithy toves
Did gyre and gimble in the wabe;
All mimsy were the borogoves,
And the mome raths outgrabe.

"Beware the Jabberwock, my son!
The jaws that bite, the claws that catch!
Beware the Jubjub bird, and shun
The frumious Bandersnatch!"

He took his vorpal sword in hand:
Long time the manxome foe he sought—
So rested he by the Tumtum tree,
And stood awhile in thought.

And as in uffish thought he stood,
The Jabberwock, with eyes of flame,
Came whiffling through the tulgey wood,
And burbled as it came!

One, two! One, two! and through and through
The vorpal blade went snicker-snack!
He left it dead, and with its head
He went galumphing back.

"And hast thou slain the Jabberwock?
Come to my arms, my beamish boy!
O frabjous day! Callooh! Callay!"
He chortled in his joy.

'Twas brillig, and the slithy toves
Did gyre and gimble in the wabe;
All mimsy were the borogoves,
And the mome raths outgrabe.

One of my favourite fantastic creatures. Rather than a phantasm of nonsense I tried to create a (somewhat) realistic Jabberwock. Imagine an amphibian, dragon-like beast lurking in a swamp's deep pond and jumping out like a frog when hunting for prey, supporting the leap with it's wings instead of actually flying - or hanging down a giant tree with it's tail like an opossum.


I might stick some warts and wrinkles to his neck and lengthen the antennae.